During the holidays I took advantage of my membership of Heritage New Zealand and visited 83 Clyde Road.  This is the house that has been recently purchased by the New Zealand Government as Kate Sheppard lived there from 1888 to 1902.  It was in this house that the 1893 petition to parliament was glued together, that culminated in New Zealand women being given the franchise.

It was on my way down the passageway for the second time, that my brain switched from holiday to work mode. The photograph of William Sidney Lovell- Smith, Kate’s second husband leapt into focus, coupled with the information that he had worked in his father’s printing firm, Smith and Anthony.  With the help of one of the staff on duty at the house,  we confirmed that I was not making connections were there were none to be made, and I left to undertake some more research.

Where had I seen both that name and the firm before?

Then, using the information in the Obituary in the Press it became possible to trace his connection with the paper.[i]

The obituary states that he joined his father’s firm of J.T. Smith in 1872 and that this firm later became known as Smith and Anthony.   In addition he was managing director from 1890 until 1926. However,  an examination of Diocesan and other sources suggest that the evolution of the firm was not quite as simple as that.

The Press in September 1926[ii] records that the firm was founded on September 13 1869 and was originally known as Smith and Armitage.   However with the resignation of John Armitage to become a Wesleyan Minister, the firm became known as J T Smith. [iii]

The New Zealand Church News first indicates a connection with the firm in September 1888 when the printing and publishing of the paper was  taken over by Anthony, Sellars & Co , it appears, from Angus Turner, General Printer of 100 Oxford Terrace.

This is confirmed on the front page of the 2nd Annual Session of the 16th Synod of the Diocese of Christchurch, held 18-28 October 1892, and published in 1893. Smith, Anthony and Sellars and Co Ltd were stated to be the Diocesan Printers.

This information conflicts with the Press Statement that Mr J O H Anthony joined the firm in 1890 , and the firm became Smith and Anthony at that time.[iv]

Concurrently the firm of J T Smith continues to advertise in The New Zealand Church News from January 1898 to July 1899. This address of 211 Cashel Street later became the address of the Wesleyan Book Depot. 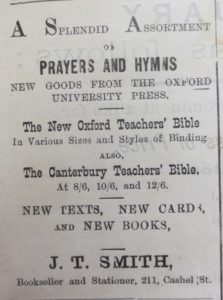 It was not until November 1903 the Press announced that the Printing, Engraving and Account Book Manufacturing Business would become known as Smith and Anthony[v] and under this name they advertised in The New Zealand Church News from February 1909 until August 1910. 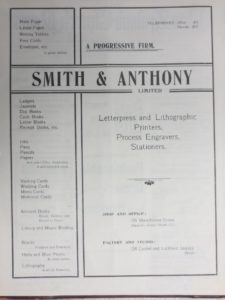 Smith and Anthony published The Diocesan Year Book until 1911 and their last byline in The New Zealand Church News was June 1911.

In July 1911 the by line of Messrs Marriner Bros and Co, Colombo Street, Christchurch appeared on the back page of The New Zealand Church News, so Smith and Anthony’s association with the paper had ended.

And what happed to Smith and Anthony? In 1926 they were amalgamated into the Dunedin Firm Coulls Somerville Wilkie,[vi] who in their turn amalgamated with Whitcomb and Tombs in 1971 to become Whitcoulls in 1973.

[iii] John Armitage was ordained a Wesleyan Minister in 1875 and was drowned when the SS Tararua foundered off Waipapa point on its journey between Lyttelton and Bluff. John B Richardson, another Wesleyan Minister also drowned.  Click here for further information.